Following our previous entries of the “96boards: Autoware everywhere” blog series where we focused on the Hikey970 we now move on to a different board, the Qualcomm® Robotics (RB3) Dragonboard-845c Development Platform.

As we did for the Hikey970 we will show how to run different subcomponents of Autoware on the RB3 platform. This post looks at how we can get Autoware.AI running on the board and is organized as follows:

The steps outlined in this blog posts build up on our previous posts and as such you need to:

In addition, if you plan on developing real-time applications in the future your board should be running a RT-enabled kernel as we outlined here.

Getting the Docker image

Linaro’s Debian image is based on Debian Buster. At the time of writing Debian Buster is not a Supported platform for ROS2 Dashing Diademata. So we will make use of the pre-compiled Autoware.AI docker images for arm64 targets.

we will use this folder to store the rosbag demo data.

Which will pull and run 1.13.0-melodic Autoware image. Once inside the container if we do ls we will see:

Getting the demo data

In addition to the Docker images we need to get the demo data for Autoware.AI’s rosbag demo and a yaml file containing basic parameters that need to be set up for a headless run. To do so:

We are now set to start with the rosbag demo. Let’s find out how far we can push the RB3 board.

NOTE: As happened with the Hikey970, due to memory constraints on the RB3 we will not be able to run all the rosbag demo components in the board. So we will run my_map.launch, my_sensing.launch and my_localization.launch in the board.

To change things a little we will check whether the ndt matching algorithm is successfully getting a pose using the ndt_matching_monitor node. If instead you want to visualize the demo output in a laptop you can follow the steps that we outlined for the Hikey970 here, since it will be the same.

To run the each component of the demo independently we will need 5 terminals where we have ssh’ed into the RB3.

In Terminal 1 we run our container and, within it, make an .autoware folder and copy the data folder over:

If you plan to run the visualization in a laptop or other board, you will need to set the needed environment variable as per ROS in Multiple Machines tutorial as we did here.

Now, in one of the other terminals we check the name of the created container, which will be something like:

We can now access the same container on each of the terminals so that we do not need set the same environment variables on each individual container. On terminals 2 to 5 we do:

We are now set to kick things off:

Due to the board constraints we need to select the OpenMP implementation of the ndt matching so the computational load is distributed between the available board cores. As an example, to do so we can modify directly the installed launch file as follows:

To check that the localization is running appropriately in the board we can do:

At the start the ndt_status will output NDT_NOT_INITIALIZED as shown in the image below. 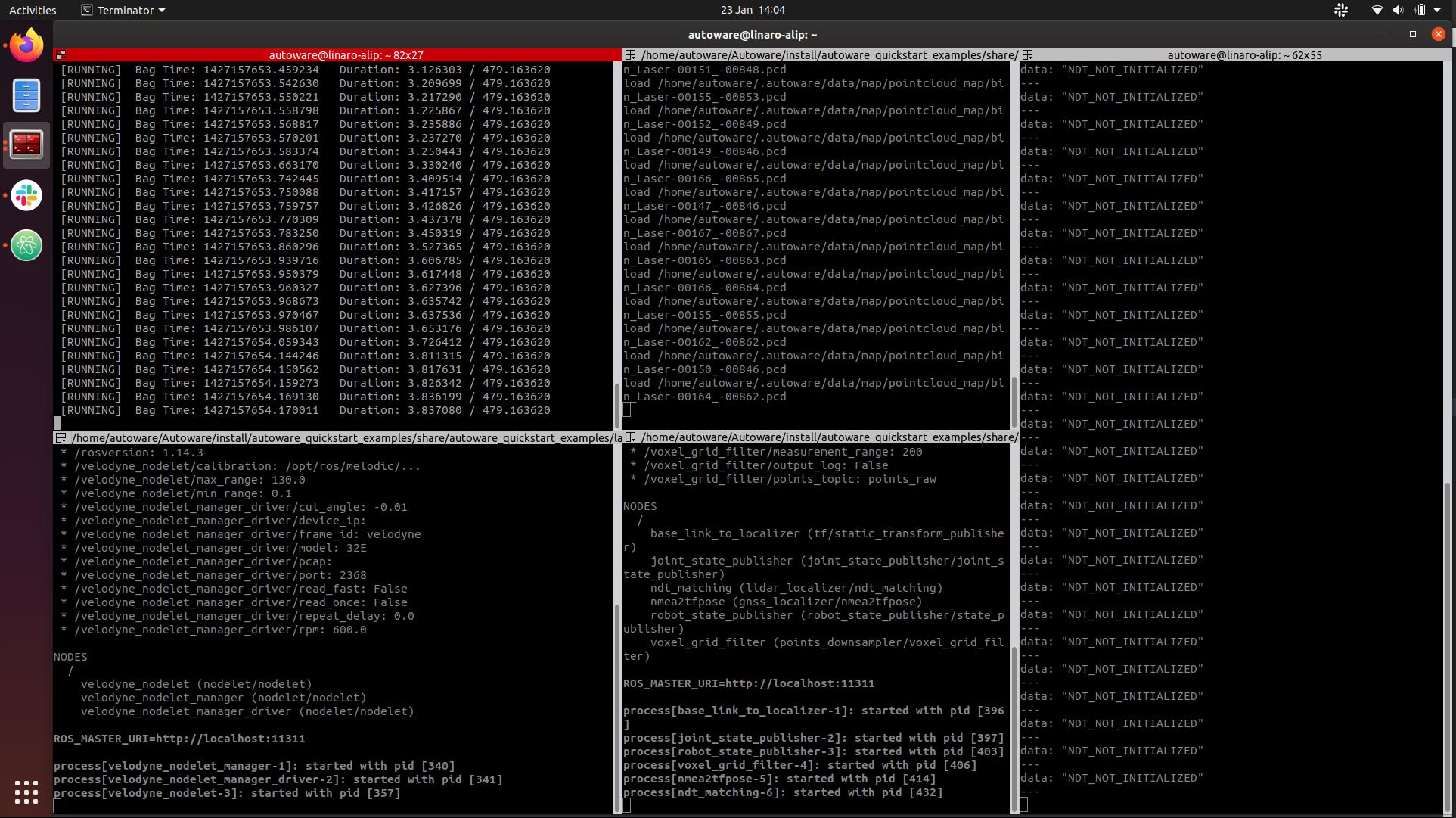 Once the ndt matching algorithm is able to localize based on the lidar readings and the pointcloud map you will see data: "NDT_OK" in the terminal as displayed in the next image. 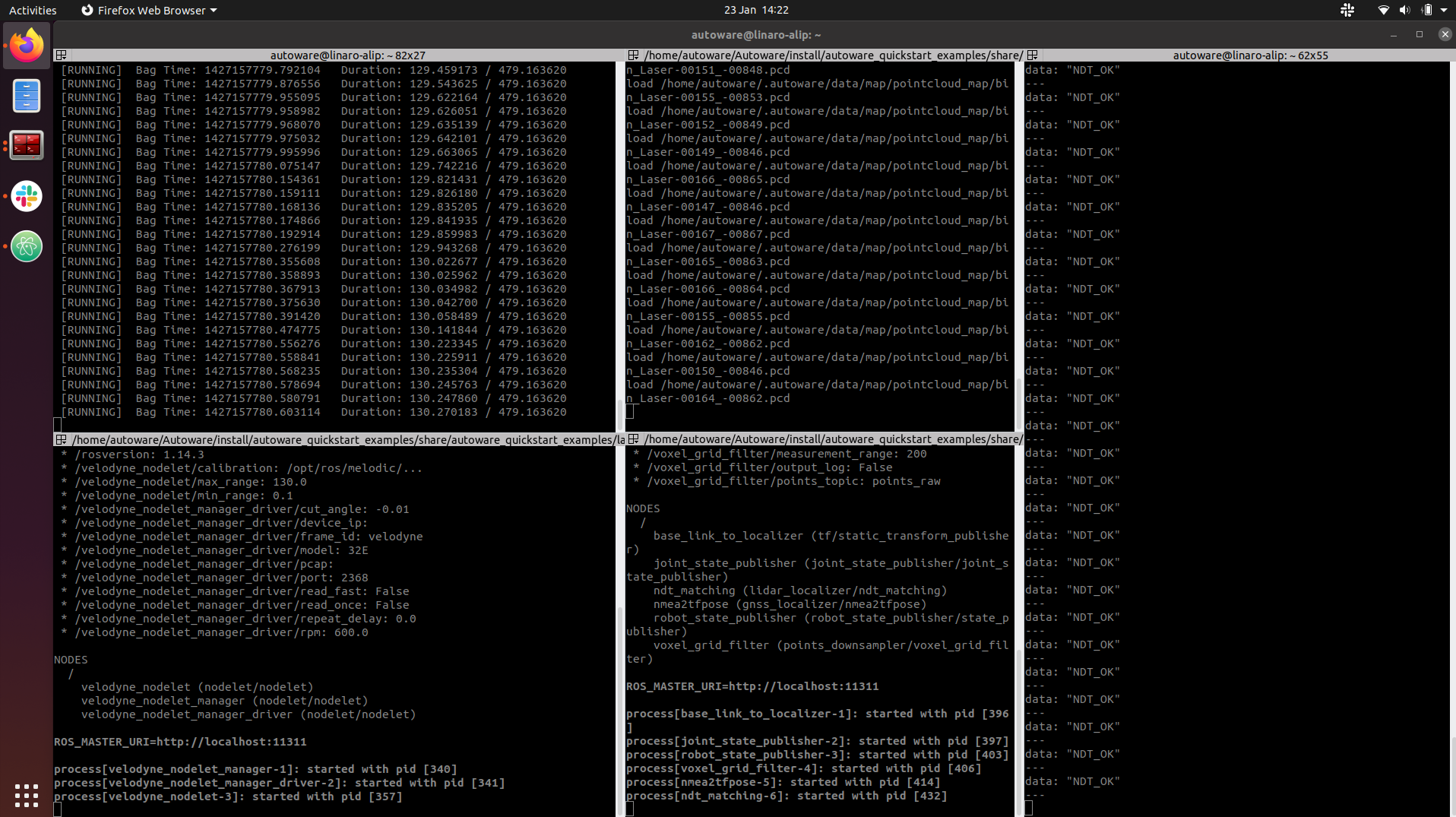 NOTE It is possible that the ndt matching algorithm is not capable of localizing successfully. In this case you will see data: "NDT_ERROR" in the rostopic terminal. 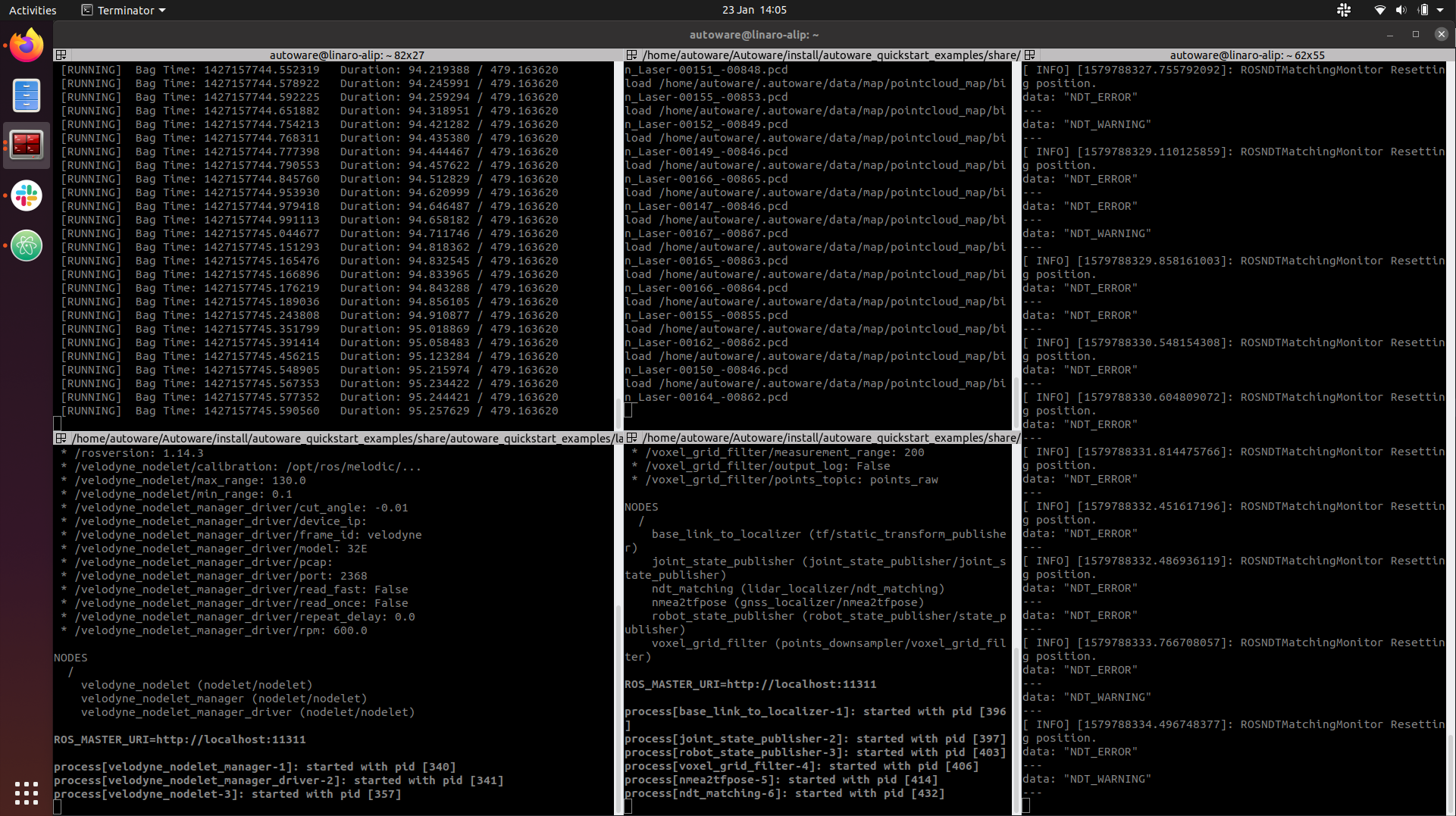 This might be due to the hardware requirements for running such computationally expensive algorithms as Autoware.AI algorithms have not been optimized to run on constrained hardware. It is worth noting that the re-writing effort that is being put into Autoware.Auto is likely to address these problems.

The “Autoware everywhere” blog series is aiming at deploying different components of Autoware on to different SoCs to prepare for the Heterogeneous platform from Autoware.IO. In this blog post we have investigated how we can run the localization component of Autoware.AI on the RB3 hardware.

With this post we are now in a suitable position to combine the Hikey970 and RB3 boards to fully run the Rosbag demo. We will show how we can do this in a future blog post.

Next time, we will give a go at Autoware.Auto on the RB3 and we will follow the Autoware.Auto 3D Perception Stack demo, so keep an eye to this space.